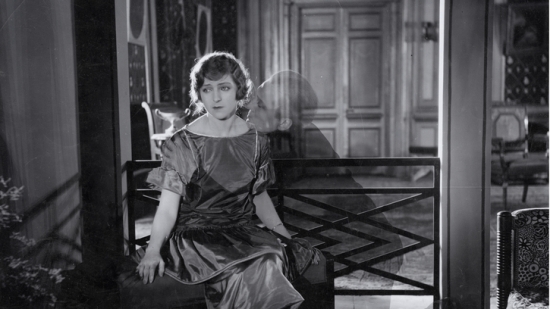 René Clair was one of France’s most celebrated auteur directors, who made great films in both the silent and sound eras and on each side of the Atlantic. We’re thrilled that our festival will host the UK premiere of Lobster Films’ new restoration of his first feature film, Le fantôme du Moulin-Rouge (The Phantom of the Moulin Rouge, 1925). And we’re even more excited to say that this screening will be accompanied by two of our favourite musicians, multi-instrumentalist Stephen Horne and harpist Elizabeth-Jane Baldry.

Although Clair is credited, quite rightly, with one of the most sophisticated transitions to the talking pictures with the eloquent sound design of Sous les Toits de Paris (Under the Roofs of Paris, 1930), his silent work is particularly fascinating and has been overlooked by too many people. His silent work combines the avant-garde, the comic and the fantastical to make films that are filled with beauty and wonder, as well as humour.

Clair was born in Paris in 1898. He studied philosophy at university but during the war he served as an ambulance driver, which was naturally a scarring experience. Afterwards he became a leftwing journalist but after a chance visit to see a girlfriend at the Gaumont studios, he fell into film acting. He began editing a film magazine too, and took on some work as assistant director to Jacques de Baroncelli. 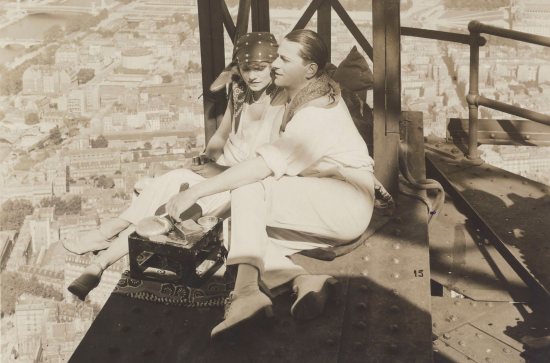 His first film as a director was Paris Qui Dort (also known as The Crazy Ray, 1924), a gossamer fantasy set in his home city that we would now categorise as science fiction, in which a deranged inventor suspends time with a magic ray. The only people able to move freely in the frozen city are the passengers on board an airplane that was flying just out of reach.

Between finishing that film and its first screening, Clair was commissioned by Francis Picabia and Erik Satie to make a short film to be integrated into their Dadaist ballet Relâche. This was Entr’acte (1924), Clair’s avant-garde concoction of dance, surrealism and experimental film technique. Immediately he gained a reputation as talented, innovative director, capable of creating beautiful moving images.

This is when he made Le fantôme du Moulin-Rouge, his debut feature, starring Albert Prejean and based on a novel by Walter Schlee, with ambitious sets by Robert Gys. Again, Paris is at the mercy of weird science, in this story of a respectable businessman (Prejean), who discovers the secret of astral projection. He is unable to resist the temptation to cause mischief in the capital, wreaking havoc across the city, and in particular, the Moulin Rouge. This bizarre scenario creates the perfect showcase for Clair’s fondness for visual fantasy, with sequences that recall the work of the French master of cinematic illusion, Georges Méliès. 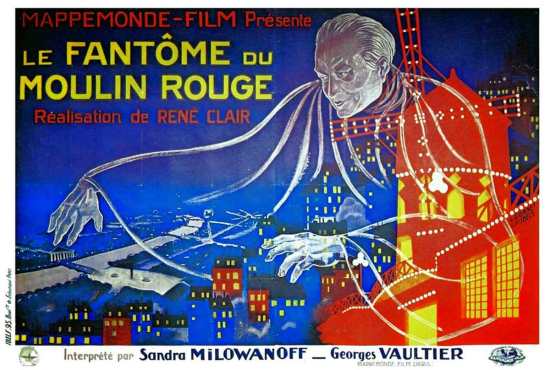 After Phantom, Clair made another fantastical comedy, The Imaginary Voyage, before signing with the Albatros studios, formed by white Russian exiles. He joined thenm to make a straight drama, Le Proie du Vent (The Prey of the Wind, 1927), but it was also there that he made his final silent features: the sublime comic adaptations of Labiche, The Italian Straw Hat and Les Deux Timides (both 1928).

After that, the roof tops of Paris, sound cinema, and even Hollywood were to come calling. We hope you’ll join us at the 20th British Silent Film Festival to enjoy the silent wonders of René Clair tilting at a windmill in Le fantôme du Moulin-Rouge.