This year, the British Silent Film Festival is commemorating the anniversary of the birth of the Weimar Republic. This means we will be looking both at some acclaimed German films of the 1920s, but also international co-productions and those British films that betray the clear influence of Weimar cinema. We are also exploring the origins of the horror genre, as the  nights draw in. So there is no finer way to begin our festival than with an influential and bold classic of German Expressionist cinema. We want to create the perfect atmosphere too, so our opening night movie will screen at the New Walk Museum and Art Gallery in Leicester, which is home to an internationally acclaimed collection of Expressionist art.

The film we are screening is Karlheinz Martin’s From Morn to Midnight (1920) – a bold  film that epitomises the styles and concerns of German Expressionism. The Expressionist movement moved from fine art – distorted perspectives and artificiality combine with thick, obvious brush strokes to create a visual representation not of naturalism but of the artist’s innermost psychological turmoil – to the theatre . From Morn to Midnight was made very shortly after the famous The Cabinet of Dr Caligari (1919), which has widely been celebrated as the first true Expressionist film. It shares with that film a sense of foreboding and introspection, a feeling that the outside world is filled with danger – and of course a heavily stylised, theatrical production design.

The director, Martin, came from the German stage, where he had mounted several Expressionist plays to great reviews. From Morn to Midnight was his first film and he worked on and off in the cinema until 1939. This film actually pushes the idea of anti-naturalist design even further than Caligari. The radical art direction is by Robert Neppach, who designed more than 80 films during his career, including Desire (FW Murnau, 1921) and Lucrezia Borgia (Richard Oswald, 1922). The images in this film are almost completely divorced from reality – and in one chilling recurring scene, the protagonist (The Banker) is plagued by visions of death. Literally, a young woman’s face is transformed into a skull. Against a velvet-back backdrop, the physical locations of the film (a street, a bank, a racetrack) are constructed from the simplest and strangest details. We’re never sure whether we are in the real world at all.

From Morn to Midnight was adapted from the play of the same title by the Expressionist playwright Georg Kaiser, written in 1912 and first performed in 1917. The story of the film takes place across five acts and over the course of one day. The Banker is played by Ernst Deutsch, whom you may know from 1920’s The Golem, or much later, as Baron Kurtz in 1949’s The Third Man. When a rich woman visits his bank one day, he begins to understand the lure of money, and steals a huge sum, with which he absconds. He attempts to find pleasure in spending the cash, only to ultimately realise that material pleasures are insubstantial. 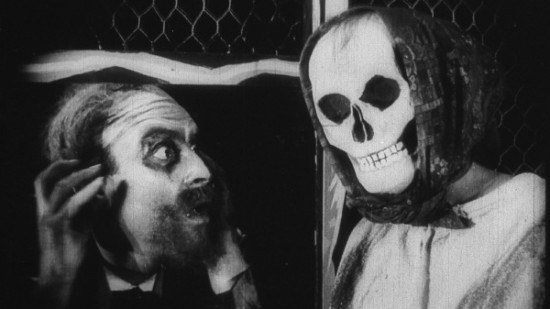 So it’s not just an Expressionist horror, an interrogation of one man’s disintegrating psyche, but something of an anti-Capitalist film, and one that may have seemed especially bitter in the subsequent years of hyperinflation in Weimar Germany. In many ways, as well as exemplifying the high style of German Expressionism From Morn to Midnight also anticipates the social commentary of later Weimar cinema, especially the rise of New Objectivity and the street film.